Earlier, back in May, I got the Corsair to John Midwood’s for some long over due engine work to be carried out, as the oil leaks were getting worse and the nearside cylinder head, rear core plug needed replacing. In readiness, I had got new core plugs and crankshaft seals (front and rear) on eBay, but then needed a bottom end gasket set available from Burton Power which also came with crankshaft seals and ‘O’ rings. Also, John advised I got a gearbox front oil seal which I purchased from Bearing Kits UK but ended up getting a gearbox oil seal set just in case.

END_OF_DOCUMENT_TOKEN_TO_BE_REPLACED

A few more hours spare on a Sunday afternoon and the exhaust system, starter motor, prop-shaft, gearbox lower cover plate and other small items were all re-connected and the gearbox to engine all tightened up.

One minor glitch that could have spelled a disaster, was that the gearbox had some how gone into gear whilst out of the car. So when when the prop was re-connected the car couldn’t be rolled back into the garage. The gear lever mechanism had to be refitted with some guess work, and with a bit of luck slotted back into place and I was able to take the car out of gear. The Corsair seemed a lot heavier pushing back into the garage too!

Well, it was a long wait for my motivation to return and some good weather (last week was good too but lacked the desire to do anything), but it did and I have the re-faced flywheel and a new clutch plate with existing pressure plate now installed. I also eventually got the gearbox loosely in after a 2.5 hour tussle!

All bolts need to be tightened properly but the prop-shaft, gearbox bell housing front plate and exhaust system still need to be put back together. At least the worst part is done and the other bits can be done more easily soon… (famous last words).

Had some free time to get the ‘box out again to retrieve the clutch assembly (clutch cover) that needs to be replaced or at least checked out/bench tested by a clutch specialist. I started around 10.30am and had the Corsair up in the air by 11.30am and ready for the gearbox removal. The experience wasn’t too bad, I had forgotten a lot of what I went through last time, like how to lash the rear part of the ‘box with rope but it came out fairly easily, once I had taken off the nearside exhaust manifold (see previous post). So all out by 1.30pm and the Corsair was back on its wheels, minus the gearbox.

It took from about 8.30 this morning jacking up the rear and putting onto the car ramps, then jacked up the front end which was placed onto axle stands. 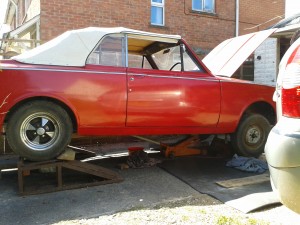 The gearbox was manoeuvred on some plywood scraps under the car and in to position. Rope was slung under the main body of the gearbox and tied off to a bit of 2×1″ through the trans tunnel inside the car. This was later chocked with bits of wood to raise the gearbox when required. In the meantime the trolley jack had been put under the ‘box to take the strain.

This was wasn’t working, the gearbox was too unstable on the jack alone and with the middle section now supported by the rope. I had a fair bit of movement but was still struggling… I stopped for lunch at 1pm. 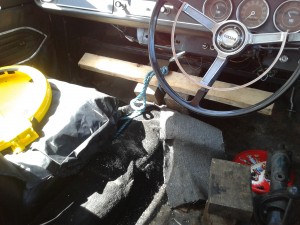 I resumed 1.30-ish, with my son (aged 10) now trying to help and be another pair of eyes. The lower stud guides I’d put in where doing their job but the ‘box was leaning to the right (towards drivers side) and the upper guides where not in line with the top of the ‘box.

After about an hour or so, I re-jigged the box so it was sat on a small section of 3 plywood and other bits to seat it properly with out wobbling about on the jack. On the re-try, my son was saying it was fowling the nearside exhaust manifold (not his words) and perhaps I should remove it… I carried on ‘cos dad knows better as I had got the gearbox out without having to remove the manifold!

My son soon got bored, and went off to play… I was edging the gearbox a bit nearer each time and nearly got it onto the two stud guides I had at the top of the block. I then heeded my 10 year old sons advice and loosened off the near side exhaust manifold. A few wiggles and the gearbox was onto the top two studs, yay! Some more wiggles and it got closer and closer… Then it sort of slopped/popped in to place. This was about 3.30pm.

Nice weather, so I took the day off to tackle the next stage of the clutch problem by removing the gearbox. By midday the gearbox was removed and clear of the car. Not too difficult, two trolly jacks and a some wood to drag the box out on and I remained fairly clean.

The clutch pressure plate and friction disk where removed and inspected. All looked ok but I had no means of testing whether is was scrap or a functional unit in need of lubrication. Anyway, I cleaned up the surfaces the friction plate came into contact with, sqiurted some WD40/Spray grease on what looked like they should be moving parts and put it all back in. The clutch assembly was all centralised properly using a tool I had inherited a while ago but not used until now.

The worst bit was to come, re-fit of the gearbox. Balanced on the two trolley jacks it got as far as about 3″ (8cm) away from going back on. Filthy dirty by now, I conceded defeat after 3 hours including some help from my wife in the latter stages. I simply ran out of muscle power or strength to lift the box back into the back of the engine. I may need some extra muscle to help.