I had a successful day refitting the fuel tank and putting in the new copper fuel line. Removing the old fuel line (steel) and fuel return pipe was awkward as it necessitated taking out the prop shaft and uncoupling the hand brake cable. It meant the tricky process of putting the new 4 metres of copper fuel line in was made a bit easier. I tried to copy the pattern of bends on the ‘bench’ in the garage but it was proving difficult with almost disastrous consequences of kinking and flattening the pipe with my pipe bender. So, the alternative approach of one long length of pipe was positioned up under the car and bent up in situ.

END_OF_DOCUMENT_TOKEN_TO_BE_REPLACED 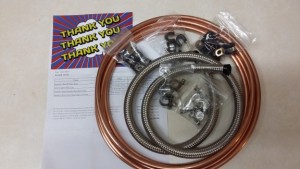 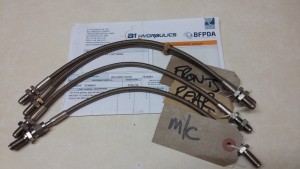 Been shopping of late, new fuel pipe with the fixings in stainless and stainless braided pipe in the top picture and new brake lines all in stainless including one for the master cylinder to match the clutch hydraulic pipe in the one below. I’ve still to remove the rear flexible brake pipe but I have been soaking it in WD40 for a while now – I don’t want to snap anything at this stage!

This weekend I hope to nip over to Hill Top Motors and get the pistons out of my front callipers to un-seize them and then will be looking forward to a day off, get the Corsair up on axle stands and spend a day plumbing the fuel tanks and new lines in along with the overhauled brakes. Well, that’s the plan!

As you can see from the photos I have a nice decent fuel tank. John Midwood welded up the pin holes on the fuel tank just after Christmas and he was pleased the tank had cleaned up better than initially thought. As soon it was back in my possession in the first week of January 2016 I painted it in two coats of black gloss Hammerite.

I soon set to work on buying some fuel pipe parts which I’ll post pictures of later, just waiting on some brake pipe components in stainless steel to come in the post.

So, the Corsair hasn’t stalled as such – in fact I have twice started it up to get it back into the garage after working on it out on the driveway. Next job will be puttting in the new fuel pipe and fixings and un-seizing the front brake callipers and checking the rear brakes too.

After a couple of phone calls around, I eventually consulted with John Midwood from AJ Restorations in Ludwell, near Shaftesbury, about repairing the fuel tank hole(s) near the filler neck on the top side of the tank. He was quite concerned that the underside of the fuel tank was in poor condition and may not be worth too much work being done to make it worth while.

END_OF_DOCUMENT_TOKEN_TO_BE_REPLACED

Well I was on a roll and had a couple of hours to spare on the Sunday (yesterday) so decided to remove the fuel tank. It had a couple of small rust holes on the top side that I felt at this point could be fixed, by some one else. Upon removal, I was surprised to find just short of a gallon of 13 year old leaded petrol in it. That was poured out and will be kept for parts washing.

The Sender unit was removed for inspection and an attempt at cleaning it was carried out. Currently seeking advice on whether to blank off the return fuel pipe (bit with the old black pipe still attached).