When I got the Corsair back on the Friday (26th July) my main goal was to get it to the local classic and bike show at the Barton Hill Recreation ground, on Sunday. There was an existing problem that I had forgotten about which was the ignition light staying on and glowing brighter with more revs. I spent an hour or so on the Saturday diagnosing it to be a failed alternator. The Barton Hill show wasn’t far, and I sensed the Corsair had enough battery life to at least make it to the show which I had missed for the last 3 years. The show was a peaceful informal affair, with a few people taking an interest in the car.

END_OF_DOCUMENT_TOKEN_TO_BE_REPLACED 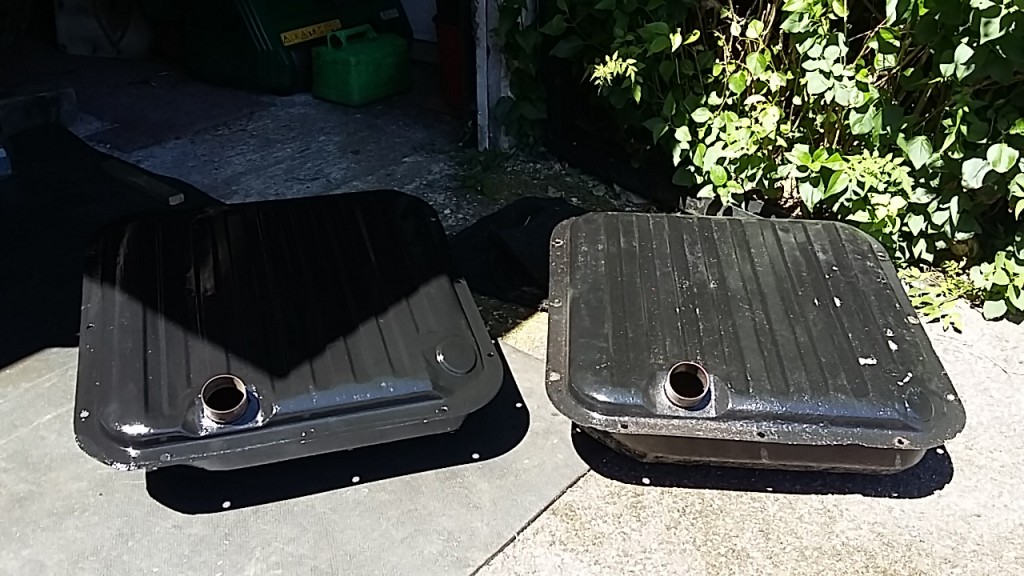 Saturday morning was when I had a spare hour and I could fit the replacement fuel tank knowing it wasn’t a too arduous task having taken the fuel tank out before. I was hopeful about the fuel sender would work that came with this fuel tank but unfortunately it didn’t. Anyway the new tank looked so much better and was much cleaner (clean metal) inside, so I transferred about 2 gallons of clean looking fuel from the old tank. That is where my glory ends.

END_OF_DOCUMENT_TOKEN_TO_BE_REPLACED

Being somewhat dismayed with life and other things, I had left the Corsair well alone – there was no need to involve it in any work, feeling the way I was. Typically though, the weather had been extremely nice from the first May Bank Holiday weekend with it still continuing to be hot and sunny, including today, the day I finally ran out of excuses not to do something for the Corsair. So, feeling brighter and more confident with myself, I chose to use the day to clean up the spare fuel tank I bought way back in February.

END_OF_DOCUMENT_TOKEN_TO_BE_REPLACED

So in early March, I was going to try and do an electrical test of my circuits to the fuel pump, but wasn’t sure how to use my tester unit properly. I therefore took a peek at the ignition switch which threw up this horror to me… evidence of things getting hot and a potential fire risk. Could something else be causing this? or was it the switch mechanism shorting out? There was fair bit of corrosion on the terminals and I wouldn’t be surprised if the internals were in a similar condition.

So, Easter Sunday (1st April) and I finally get the energy to go out in to the garage, plus it wasn’t too cold, wet or snowy. I plugged in the new ignition starter switch that I got some time ago and cleaned up the terminals by cutting off the old melted insulation material. With the wires and spade connections exposed they looked to be in good shape and I didn’t think they needed a rewire, so wrapped them with insulation tape for further protection.

So, with the battery reconnected it all fired up, and the engine stayed running. I just need to re-tune the carburettor just as John had last year because I still had the flat spot even after putting in new jets.

Update 2nd April: The engine fired, ran for about a minute and then cut out, for it not to re-start – so back to square one.

Since the Corsair spluttered to a halt on the on the driveway back on Christmas Eve, I’ve been tinkering away trying to solve the fault. Testing the fuel pump, checking the points and condenser, rebuilding the carburettor and fiddling with all manner of idle mixture settings, had not made any difference. The Corsair would start, fire on the first turn over then cut out.

END_OF_DOCUMENT_TOKEN_TO_BE_REPLACED

The Corsair has been with John at AJ Restorations for 2 months now, however my brief to him was to tinker between his bigger paying jobs to keep the costs down, only thinking it would be a carburettor tweak and a few other bits of tuning to get the car running properly. Well, nothing is ever simple. There are problems with the carburettor possibly having the wrong idler needle and jets but the main issue now is that the distributor appears to have seized in its mounting and won’t turn for adjustment.

Visiting John’s today, I got to chat with Peter who helps out twice a week and is Ford trained from the 1970’s so he is quite familiar with the Corsair. However, the distributor is stuck, seized, no move. The internal weights had seized up too but they free’d off after a good soak with oil. So, the Corsair is looking rather sorry for its self at the moment.

I also took down the distributor I bought some months back and after taking delivery had a suspicion that it was for another Ford car. It is quite different to the one in the Corsair which is probably a Lucas type and the new old stock one I had was a Bosch. Anyway, it was hard to identify the numbers on the box but John knows a man that can and if isn’t suitable then I should have the right info to re-sell it.

Last week – too much of a crap mood to write anything then – I looked at taking the Corsair out for a bit of test drive around the nearby garages/flats access road. While it took a bit to get started, the engine ran lumpy with popping and back firing through the carb, just as before. All I could think of was the fuel was dirty and contaminating the jets and other fine points of the carburettor. A message on Facebook about this and it was suggested that the electrics were at fault, but the other week the engine was running sweet, however the fuel did look dirty in the carb float chamber. So I have decided to remove the fuel tank (at some point), clean it best as I can and flush through the fuel lines, filter and pump, clean the carburettor (again) and hope this will solve the carburettor set up problems. I have also bought a NOS Motorcraft distributor, but upon closer inspection suspect it is for a Pinto (Ford) rather than for Essex V4.

I will get on to it when I feel like it and I need to buy a cleaning agent for the fuel tank.

Had about 2.5 hours out in the garage fiddling about with the Corsair – got the new alternator fitted OK this time and looked at changing over the dodgy ignition barrel – but I bought the wrong one that had 3 main terminals not 5… So liberal amounts of lube oil and WD40 into the old one (it was sticking on starter turn over) and cleaned up the terminals and then it took a few attempts working out which wires plugged into the terminals – I tell you, I don’t do things very well in my haste and forget to make notes before taking apart or unplugging…

END_OF_DOCUMENT_TOKEN_TO_BE_REPLACED

It was a nice day [Sunday 17/04/2016] and I decide to bite the bullet and convert the Corsair from a dynamo charging system to an alternator. Armed with a guide from a March 2008 issue of Classic Ford, I had all the components needed; mounting bracket (off an Essex V6 – Capri or Scimitar) and a new Lucas alternator.

First problem was finding long enough bolts of imperial sizes to fit the new (Essex V6 – ebay) bracket to my my V4 block. With the bracket on, it was then unwrapping the new alternator and now my next problem… the tensioner mount hole was on the wrong side. I’m sure I selected one for an Essex V6…

Reluctant to put the dynamo back on I dug out two ‘spare’ old alternators that I had for a Pinto engined Capri. One was seized solid the other, although knackered, at least had a rotating pulley. So after some more rummaging for nuts and bolts (I could go metric here) I got it fitted so at least the fan belt could be used to drive the other components when I start the car up to get it back into the garage.

END_OF_DOCUMENT_TOKEN_TO_BE_REPLACED

Had a tinker last Sunday to try and trace the fault with the ignition. With help (and I mean it) from my 11 year old son, we are sure it is the coil that is faulty. Using my screw driver test lamp with crocodile clip I checked the points and condenser which according to the instructions in the Haynes manual appeared to function fine. I later re-learned what was the Low Tension (LT) circuit and the test light glowed when on the + terminal of the coil when it should have not… or something like that.

Anyway, I’ll need about £35 for a new one, so it’ll have to wait. I didn’t test the clutch this time, forgot, but will try to next time.

If you have advice you can pass on, please comment below.